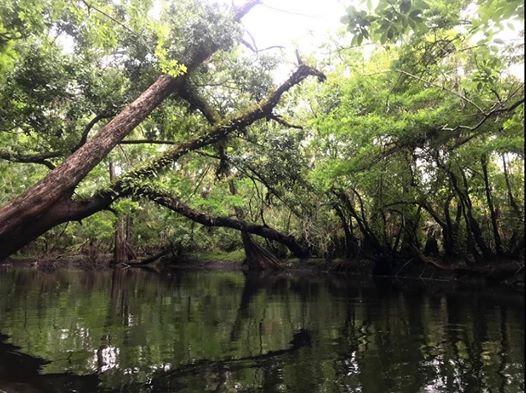 I recently had one of the most exciting adventures of my life. The afternoon started with a plan to drift lazily down the Loxahatchee River taking pictures of wildlife, as I would be blanketed by the shade from the 500-year-old Cypress trees. That plan was suddenly exchanged with an adventurous kayaking trip that I would never forget.
Canoeing and kayaking on the “Wild and Scenic”

Loxahatchee River is day full of adventure and beauty that is a must do for anyone in the Jupiter, Florida area. That afternoon I met Eric Baily who owns the canoeing and kayaking outfitter. We spoke briefly and he sent me out to meet Mike, his assistant, at the river’s edge. Mike set me up with my kayak and life preserver, gave me some brief instructions and pushed me off to experience the river.

I started down the river and was in awe at the magnificence and massiveness of the cypress trees that surround the river. These trees gave refuge to all forms of wildlife that I began to see immediately. Osprey and woodpeckers could be seen and heard in the trees above while plenty of river otters and Florida Red-Bellied turtles relaxed along the fallen branches along the river’s banks. The river’s name, Loxahatchee, actually means “the river of turtles.” As I cruised down the river I realized the appropriateness of the name.

As the sun peaked through the tress at the wider parts of the river, I was able to observe the fish that inhabit the river because the water was crystal clear. I saw Large Mouth Bass and Mullet swimming and feeding in the deeper sections of river.

After I led my kayak down the first of several dams, I came upon a narrow “S” in the river that led to another opening, this is where my adventure began. I came to the open area and saw three baby alligators sunbathing on a log protruding from the water. I paddled toward the three small gators only to notice the eight-foot mother gator sunbathing next to her babies! I was able to drift slowly and quietly to within ten feet of the mother and babies. I slowly pulled out my camera to get a close up shot of the family. I got the several pictures off before I felt I was drifting too close for my level of comfort. I snapped my last shot within ten feet of the family, and quickly turned and reached for my paddle. The quick turn and poor balance made my kayak lean just enough to allow water to rush into the boat causing it to flip and send me into the water right in front of the family of alligators! I FREAKED!

I franticly gathered my kayak, paddle essentials and dove for the nearest fallen branch, the whole while keeping a petrified eye on the family of gators only a few feet away. As I hung onto the branch I was able to pull my kayak, half-filled with water but right side up, underneath me. I dropped into the kayak only to have it sink with the combination of water weight and my added body weight. Now I am sitting in a sunken kayak in the middle of the river with a family of gators staring at me. I was very concerned. Again, I FREAKED! I ran across the shallow waters to the river’s bank pulling the sunken kayak and whatever was in the kayak behind. The whole while the family of alligators did not move an inch, watching me as if I was entertaining them. I finally was able to empty the kayak and get upright again. When I got back in and paddled away from the gators, it looked as if they were smiling at me and wanted to clap for the entertainment I provided.

After I gathered myself and got my senses back I had noticed that I was missing my sunglasses, sandals and camera. At the time it was a small price to pay to have all of my limbs. I did leave that experience with something extra, an education. I learned that the gators along the river are not like those that are seen on television shows. The gators were not out to get me and were probably more afraid of me than I was of them.

I continued down the river until I reached the second and larger dam. The dam had an approximate four-foot drop, and this is where I decided I would turn and head back up the river. The trip down to the second dam took about 45 minutes, including my gator encounter. My trip back up the river took about an hour due to my paddling upstream.

Canoe Outfitters of Florida offers three trip packages for the different adventure seekers. I choose Trip #2, which is a two-hour ride that wraps slowly around the scenic river. Trip #1, is a five to six hour trip that takes you approximately eight miles down the river through Jonathan Dickinson State Park. This trip requires a little bit more effort and offers return transportation to the starting point. The third trip offered is the Guided Trip. This trip provides you with a guided tour and information about the various wildlife along the river. The tour also explains some of the river’s historical Seminole War battle sites.

The trips are offered five days a week (closed Tuesday and Wednesday), and the hours are from 8: 00 AM through 5:00 PM. The headquarters are located North of West Palm Beach in Jupiter, just West of I-95 and the Turnpike, off of SR 706. You can book on-line at www.canoes-kayaks-florida.com or by calling (561) 746-7053. Almost all forms of payment are accepted. The owner, Eric Baily, informed me that the best times to visit are in April and November when the river is most active. For a great lunch after the trip Eric recommends “Duffy’s”, a restaurant about a mile West on SR 706. I may bring my wife up here and try this again and stay at one the finer hotels in the area, like the PGA National Resort and Spa or the Breakers. This way we can play hard during the day on the river and get pampered at night at these resorts.

If you are a river adventure seeker and love nature in it’s natural environment, you must canoe or kayak the Loxahatchee River. You will enjoy an adventure through the most beautiful area Florida has to offer.

Cool Things to Do in Daytona Beach

Daytona Beach, Florida is one of the most visited places in the…

Visiting Medieval Times was the highlight of our visit to Orlando. This was a…