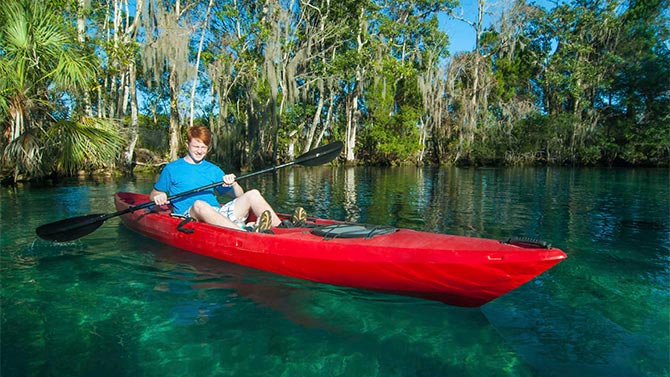 Morning came. It was a beautiful sunny September day with calm waters in Ft. Lauderdale. This would be the morning of my first Kayak race. I was a little nervous due to the fact that I’m a novice. The race was sponsored by Full Moon Kayak Co., an outfitter, and the International Swimming Hall of Fame (ISHOF), located on the intra coastal waterway of Fort Lauderdale. Colleen, the owner of Full Moon Kayak Co., was a gracious host and explained to me a lot about the race, her business, and history of this sport.

This was the first time for this race, it was called the Barefoot Mailman Race in honor of the first postmen of South Florida, those heroic civil servants that used to run and swim the canals to deliver mail. The race started at the International Swimming Hall of Fame and from there headed into the canals of Ft. Lauderdale, the “Venice” of the New World. All the kayakers were given maps of the course and had the option of which direction to go. Either way was fine, since the shape of the course was a big circle beginning and ending at the ISHOF and making its way around the canals of Fort Lauderdale.

Being one of the slower participants, I was able to enjoy paddling and took my time finding the checkpoints for each stop along the way. For me it wasn’t so much of a race, as a chance to see if I would succeed in completing the course without falling into the water or getting lost. Well, at least I didn’t get lost!

At one of the checkpoints, I had to either roll my kayak and dump myself into the water or take a time penalty. I chose to dump myself in the water. Wow, it was really difficult to get back into the Kayak, but one of the volunteer showed me the “Cowboy” move and I was eventually able to straddle my way back into the seat. This move is important to know, it could save your life.
The race took me about 3 hours to finish and I made it back to the ISHOF in one piece. I didn’t win any of the prizes that were awarded at the end, but I did have the satisfaction of finishing my first kayak race. After the race, I got to find out more about Full Moon Kayak, the company and what they did. Here’s a little of what I learned:

Colleen Gibbs Guido started Full Moon Kayak Co. in 1998 offering 4 kayak trips a year for friends and customers. She enjoyed organizing the trips and news of the trips spread rapidly by word of mouth. She became a better paddler herself, taking courses from local kayak instructors and earned an American Canoe Association certification. The desire to do this full time was always there but did not happen until after her trip to Sydney, Australia during the Olympics. While there she took some guided tours and it was then that she made her decision to pursue her passion to become a kayak tour guide. After giving birth to her first child, she was able to quit her “day job” and began working full-time at Full Moon Kayak Co. in August 2001.
Full Moon Kayak Co. offers all kind of guided tours:

The Full Moon Paddle is a moonlight tour around the canals of Ft. Lauderdale. This tour started 6 years the name provided the inspiration for the company name; The Welcome to Ft. Lauderdale History Tour takes you around the backyards of the homes in beautiful Ft. Lauderdale where you can learn a little bit about the city’s history and residents, past and present; The West Lake of Hollywood tour introduces a 1,600 acre area of waters protected from motorized boats; The Whiskey Creek of Dania tour, allows you to paddle around the same waters as the smugglers from the bootlegging years used to avoid law enforcement. This tour offers excellent wildlife trail and great view of Port Everglades. In the winter months, you might see Manatees on this tour.

Colleen offers other tours that you need to check out on her website. Go to: www.fullmoonkayak.com or call her at 954-328-5231.

The prices of the tours start at $35 per person and include the cost of the kayak rental. You’ll need to make your reservations in advance, and a major credit card will guarantee your space. Some of the guides understand Spanish and/or Portuguese to better assist international traveler. If you’d like to enjoy all of Colleen’s guided tours, you can always spend a week at the Kayak Inn where you’ll find the rates very reasonable. Call them locally at (954) 565-7085 or toll free (877) 743-4909.

There are plenty of great places to eat along the intra-coastal waterway; Colleen will show you her favorites. I would recommend stopping at the Southport Raw bar. You can pull up with your kayak and get some of the best calm chowder in town. You can find them at 1536 Cordova Rd. or call (954) 525-CLAM. Say hello to the owner, Buddy, while you’re there.

The word kayak means “hunter’s boat”. The kayak was developed by cultures in the arctic of North America from the Aleutian Islands to the East coast of Greenland. Archaeologists have found evidence that indicates kayaks to be at least 4000 years old. Kayaks were originally made of skins and wood.

These early kayaks were narrow, low volume boats that fit like a glove so that the paddler could control it and use it easily for hunting. Today, hunters have replaced kayaks with motorboats, and kayaking has instead become a popular recreation activity around the world. Today’s kayaks are made of plastic, composites and wood, and their designs run the gamut from tight-as-a-glove whitewater boats to 20 foot long touring kayaks that can carry several weeks’ worth of provisions. While the reasons we paddle may have changed, the kayak has remained a quiet, efficient means of transportation whose design has stood the test of time.
If you have any exciting Kayak stories, please send it into TropicalAdventure.com and let us post your adventure on the World Wide Web.

A Day at Red Reef Park

Key Largo is a great place to visit on vacation, as the island…

If you live in or have visited Florida, you probably know of…