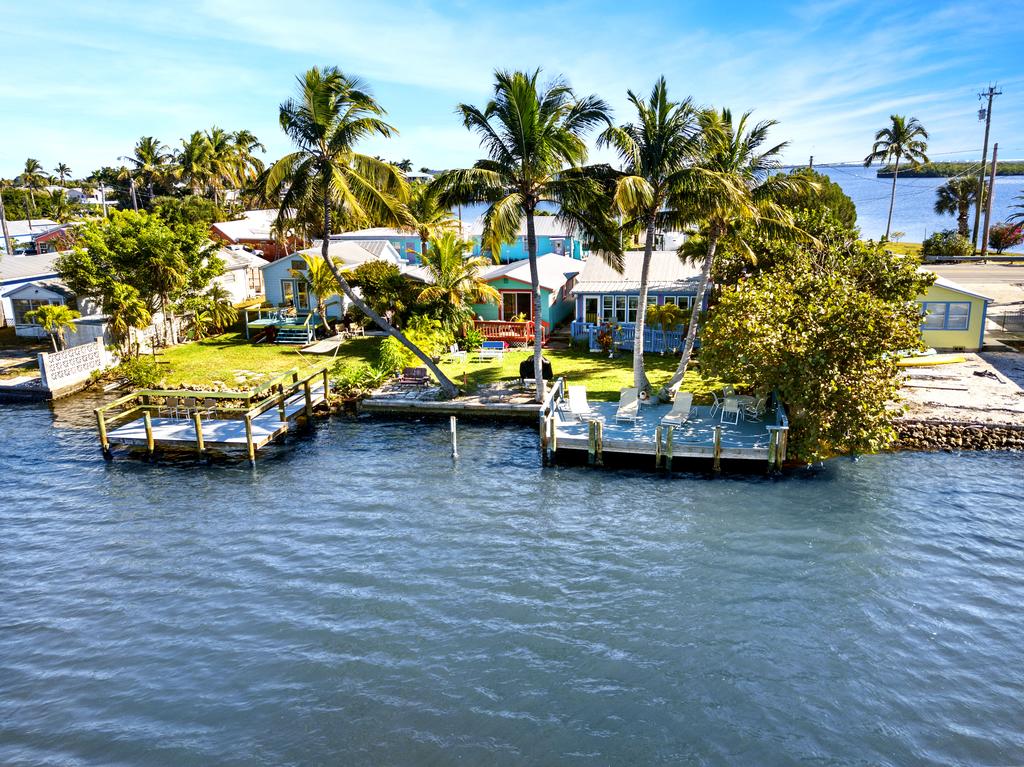 Driving across Alligator Alley with my family in the early morning, we saw the Everglades gloriously alive with birds, flying, swooping, gliding and diving over the marshy plains of saw-grass. We were on our way to Pine Island a little strip of land just off the coast of Fort Myers to meet with John Paeno of Calusa Ghost Tours and Craig “Snook Cowboy”. Timbes, our Stargazing Story Teller and inventor of a special attachment for the fishing rod that makes catching Snook easier.

As we left Interstate 75 (See Map) heading east we noticed that the mid section of the telegraph poles were beautifully painted with whimsical designs in fancy hues. We were entering the artist colony of Matlacha, the island that precedes Pine Island. We decided to indulge a little time to look around wandering in and out of the quaint and colorful cottages, admiring the cheerfully diverse array of artistic creations. We enjoyed an ice cream served in a coconut shell, while sitting in the garden of famed artist Leoma Lovegrove. Surrounded by a full spectrum of colorful pots, coconuts, frogs, a row boat and paintings of the “Fab Four” we started to feel decidedly “Groovy”.

Turning the PT Cruiser off onto Pineland Road we followed the tree and mangrove lined coast around to our final destination, The Tarpon Lodge, an original “Old Floridian” hotel. As promised our guide and island concierge, John Paeno, met us in the lobby and walked with us across the road to the Randell Research Center to meet with Craig Timbes.

Around 2.00pm from an inlet of soft yellow sand we pushed our Kayaks out into the crystal blue waters of the bay. Our adventure had begun. John and Craig captivated us with the story of Frank H. Cushing’s lost manuscripts, that when found described what he had discovered. Through land masses and
artifacts, he established that an ancient civilization existed in this area over 2000 years ago. We approached a hammock in Hidden Lagoon and gently nudged the kayaks up into a clearing. We stepped out onto the little known island to explore the campsite, w and the remains of an old fishing cottage. Amazing! Craig showed us how to make a needle and thread out of the leaves from a bayonet plant, as the Calusa might have done.

After a splendid dinner at The Lodge, John, who has spent years studying the history of the Calusa, walked us back over to the Randell Research Center, an historic site that was once the great Calusa city of Tampo. As the sun began to glow a brilliant orange, setting itself at the edge of the bay, we traversed the pathways to the base of the mound, a proud and enduring remnant of the Calusa civilization that once walked these very pathways many centuries ago. The story told by John of the Calusa was so vivid that we could feel the magic of this place and imagine the spirits still wandering, keeping watch and guarding their ancestral burial grounds. As the ground crunched beneath our feet we ascended to the pinnacle of the mound to see what the great Cacique and the Shaman would have gazed upon. We settle down onto blankets for an unobstructed view of the darkening heavens as the first twinkling stars began to appear and our interpreter Craig guided us through the Greek Mythology of how the constellations earned their names.

Day two: We enjoyed a breakfast at leisure, a swim in the pool then made our way over to the Randell Research Center. Again we found ourselves totally absorbed as we learned the ancient arts of making primitive knives, hammers, rope, thread, paint and jewelry. The museum curator at the Randell Research Center had us intrigued as we were shown tiny fragments of Calusa pottery and shell tools which had been unearthed during some of the gentle excavations around the site.

Later that day we hated to leave this peaceful place, rich in
Calusa history and nature but promised we would return soon.

John Paeno:calusaghosttours.com
Or calusabackwater.com for Canoeing, Kayaking and
Stargazing or call 239-938-5342

What is a Scallop? The text book definition says that a scallop…