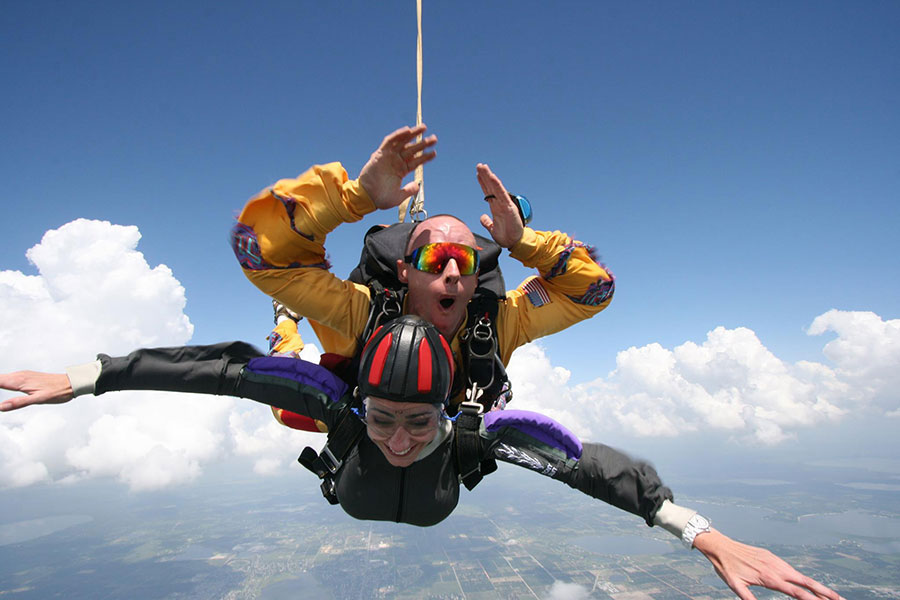 The twin-engine plane soars 2 1O2 miles above the earth, slipping gracefully through the air at 90mph. Suddenly the door opens and the thundering wind rushes in to fill the cabin with brisk air. A man climbs out and around the edge of the opening, his body hugging the side of the plane as he reaches for a handrail on the top of the airframe. Perched precariously on a tiny step between the door and the tail section, he balances on the toes of one foot, wearing a camera helmet that is heavier than a bowling ball!

Another face appears in the doorway, this one frightened and excited by the sight of the ground so far below and the prospect of jumping from the safety of the plane. A tandem passenger is about to make her first skydive connected to the harness of an experienced tandem master, and they will fall together nearly 8000 feet before their parachute opens. The tandem “pair” sways forward in a motion that commits them to gravity but the camera flyer has left a split second before, his exit timed perfectly to get the best picture! Click, click!

The tandem passenger, tightly suspended beneath her tandem master, is now smiling and blowing kisses to her video man, who literally flies circles around the pair! He swings around to get the plane in the background as it dives dramatically back to earth to pick up the next load of skydivers. The photographer stretches the wings of his special jump suit to raise a few feet above the tandem jumpers, as they spin through several 360ù turns set against the scenic backdrop of the land and ocean below. Back down to their level, he is interacting with his customer, helping her create a wonderful keepsake of her adventure. Finally, he flips from his belly onto his back, so that he is slightly beneath them when the tandem master deploys the parachute. In a kaleidoscope of color, the bright parachute spills out into the blue sky above their heads while the photographer ends the skydive with a big peace sign in front of his lens. Cool! Such is a day in the life of Keith Larrett, who is becoming well known in the world of skydiving for the amazing energy and emotion he creates in his camera and video work.
“My favorite compliment is when someone asks me how I got the shot,” says Keith who has made more than 6,000 jumps in 14 years of skydiving, the majority of which are with camera and video. He constantly seeks new angles and techniques to present his subject matter in a fresh manner and he feels rewarded when he receives such positive feedback. “In addition, I want to find more opportunities to get inside of the skydive instead of being an outsider, looking in.”

Keith was born in Zimbabwe, formerly Rhodesia, and grew up during that country’s civil war. Despite political sanctions, food rations and the violence of a civil war, his family enjoyed vacations and Keith was the one who liked to take all the snapshots. But it wasn’t until his 21st birthday, when his father gave him a gift of 1000 South African Rand, that he realized photography was more than a passing interest.
“I think my father was hoping that I’d invest the money, and I did, although not in the way he had in mind!” Instead, Larrett bought his first camera, a Chinon CP7M and began to explore photography while he was completing his degree at the University of Durban, in South Africa. He took pictures of Durban’s harbor at night and experimented with B&W images, developing his own prints.

Keith also learned to skydive during his collegiate years and it wasn’t long before he realized that he could earn money to make more jumps by taking photographs of other skydivers as they landed. Taking pictures during freefall was uncommon in South Africa with just a few hundred active skydivers during the 1980’s; it was beginning to flourish, however, in countries like the U.S., the United Kingdom and France, all with very large jumper populations. Skies Call, an inspirational, three-volume book of skydiving photography by Andy Keech, and the video, From Wings Came Flight by Norman Kent, inspired Keith to combine his love for skydiving and photography. “More by luck than by design, I ended up in America, where I started pursuing a career in skydiving,” quips Keith, who has owned and operated his video concession for four years. He currently manages the drop zone at Skydive Daytona Beach, the scenic drop zone located on the eastern coast of Florida.

Falling out of an airplane and plummeting to the earth at 120mph is something that most people never even want to try! And one of the many challenges in skydiving is that jumpers only get to practice for intervals of one minute, which is the average length of time a skydiver falls 10,000 feet before deploying the parachute. Consequently, it requires several hundreds of jumps to become proficient enough at body flight before it’s even possible to consider jumping with a camera.”I remember reading an article in National Geographic about a photographer who was asked how he consistently took such great photographs,” Larrett recalls. “He answered, ‘F8 and Be there!’ I was impressed by his reply. Not only do I have to be a skilled photographer but I also have to be a world class skydiver so that I can anticipate where the shot will happen and BE THERE.” Although he has thousands of skydives under his belt, Keith says he sometimes feels like a beginner because no two skydives are ever the same. He is continually learning new ways to deal with each situation, so that he can be there to get the shot. “If I ever got to the point where I’ve learned all there is to know about flying my body and taking photographs, I wouldn’t do it any more. But I don’t think that will ever happen.” The challenges seem endless.

Freefall photography requires some specialized equipment and mounting techniques. Keith jumps with a custom-made, form-fitted fiberglass helmet to support his cameras. His full-face helmet is crafted from a mold of his head to provide the most stability and to give the helmet the lowest profile possible, which reduces the chances that parachute’s lines will become snagged during opening. His helmet supports an aluminum plate upon which a 3-chip digital camera and up to two Nikon N90 cameras (one horizontal, one vertical) can be mounted. Each of the Nikons can be equipped with a Nikon Speed Lite flash and they are fired by a microswitch mounted inside his helmet, just below his mouth. The microswitch is activated when he purses his lips, leaving his hands free to fly. The entire assembly weighs over 20lbs!
Sighting is another area that presents challenges because Larrett can’t look through his viewfinder to see what he’s capturing on film. Instead, he uses a Newton Ring Sight to approximate his framed area and relies on his experience and instinct to know how far he must fly from his subject. He pre-focuses the cameras for an anticipated distance and needs to fly within that distance to get the photograph in focus. Slow shutter speeds are difficult since his neck is his tripod and is falling through the air against hurricane force winds!
Keith uses Fujichrome Provia and Velvia, 50ASA & 100ASA, for the best color saturation and because these vibrant, “contrasty” films lend themselves to skydiving imagery. People are often surprised that he shoots at these slow speeds, since skydiving is such a fast, dynamic sport. Because the photographer and his subjects are falling at the same rate, the movements are relative to each other and are not very fast after all.

Besides “being there,” Keith wants to show the beauty, action and excitement of skydiving to both skydivers and non-jumpers alike. “The skydivers are often so engrossed in the action at hand that they might have missed the panoramic backdrop of a scenic landscape or a brilliant sunset. Sometimes they are quite stunned when they see their dive from my point of view!” He strives to portray the magic and thrill of the sport as vividly as possible so that he can give non-jumpers an understanding when they look at his images.
In any type of photography, you start to see standard shots – photos that are good – and those that work. But there is obviously something that separates a good shot from a great shot. The backdrop can make that difference in a skydiving photograph. “In addition to the jumpers, I want to capture the immensity, the utter vastness of the space they are falling through. I like the background to remind us that we are all insignificant little specks falling through the sky by comparison!” Keith normally uses one of his wide-angle lenses to give the greatest depth of field. He films his subjects from a distance of 4-6 feet but the background is often a couple of miles away. His standard lens is a 24mm but he also uses a 28mm as well as a 16mm fish eye lens, which is sometimes the best way to “contain” the enormity of the sky while focusing on the close up action.

Shooting the subject from a different perspective is another way to create an excellent image. Keith once slipped beneath a group of skydivers exiting the plane, while the fish eye lens captured the jumpers as well as the entire plane behind them. The photograph earned a place on the cover of a popular British skydiving magazine. Sometimes, he will remain on the plane. In fact on one occasion, he leaned out of the cockpit window clicking away to another cover shot as he filmed the jumpers leaving the plane, from the pilot’s point of view!
To get “inside” of the skydive, Keith has attached a camera to various parts of his body while participating in unusual skydives and parachute descents! A belly-mounted camera snared a cover shot as he and another jumper exited the plane in an exciting “head down” dive. He fastened a camera to his sneaker and captured several impressive self-portraits under parachute. Appearing to defy gravity, he flew aggressive inverted patterns and both the parachute and the landscape whirled dizzyingly above his head in a magazine centerfold!
Larrett says he knows that he can’t do it without the subject matter so essential to his photographs. “It would be wrong for me to take all the credit. I might chose the decisive moment and have the talent to be in the right place at the right time, but if it weren’t for the wonderful skydivers, with their abilities and dedication to excellence, there wouldn’t be a shot for me to BE THERE for!”