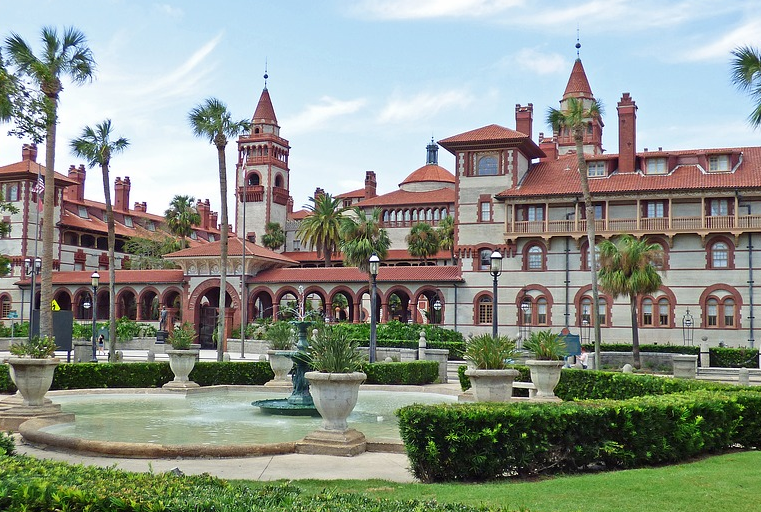 As the travel brochures and the tour guides are quick to point out, St. Augustine does not claim to be the oldest city in the United States, but the oldest continuously occupied European colony. Either way, a visit to St. Augustine is a trip through history – over four hundred years of it. And a city of contrasts. From its Spanish beginning, which is especially evident in its architecture, to its modern attractions, St. Augustine and Northeastern Florida is blessed with a combination of great things to do, beautiful beaches and history, all within easy driving distance. That is what makes St. Augustine so special.

On March 27, 1513, Don Juan Ponce de Leon discovered Florida. He was exploring for Spain in search of land and treasures to claim for his homeland. He sighted land on Easter Sunday (March 27 in that year) and called it Pascua Florida, which is a name for the Spanish Easter season. Fifty-two years later on September 8, 1565, Don Pedro Menendez de Aviles landed on Florida soil and reclaimed the land for Spain. He established the city of St. Augustine and named it for the saint whose feast fell on August 28, 1565, the day he first sighted land. Such were the Spanish beginnings.

St. Augustine’s Obvious Spanish Influence
Many attractions in the historic district show evidences of Spanish influence. The original City Gates are still standing and were the only way into the city from the north. They are located near the Visitor Center and are constructed from coquina stone, a prevalent building material here and is made from shell collected from Anastasia Island across the Matanzas Bay. The Visitor Center, which is also made from coquina stone, should be one of the first stops in St. Augustine. A variety of tours are available from the center, from carriage to tram to train. All are thorough and cover the major attractions of the historic district. Most tour tickets are good for more than one day and allow riders to get on and off at points of interest.

One of the main streets within the historic district is the pedestrian-only St. George Street, which is lined with unique shops and eateries. In this historic district of the oldest city, there are the expected “oldest house”, “oldest schoolhouse” and the “oldest drug store.” The history of the Oldest House, the Gonzales-Alvarez House, is well documented. The original hut on this site was built in the early 1600s. It burned in 1702 but was replaced with a structure made of coquina stone. Those original walls still stand. Records remain that trace the families who occupied this house for nearly four centuries. This St. Augustine museum is in itself a must see attraction.
The Ponce de Leon Hotel, a lavish 18th-century Spanish Renaissance structure, was completed in 1888 by millionaire developer Henry Flagler and is now home to Flagler College. It is located in the heart of St. Augustine and is a very impressive, instantly recognized building. Across the street is the former Hotel Alcazar, which houses the Lightner Museum with its collection of artifacts including examples of cut glass and Victorian art glass. Within the former hotel’s casino area is the Lightner Antique Mall, which contains a remarkable collection of nineteenth century art and antiques.

The Fort Castillo de San Marcos still stands guard along the Matanzas River. The fort was never conquered and endures as the nation’s oldest and only remaining 17-century stone fort. Tour the National Park Service’s fort, and then step across the street (San Marcos Avenue) to the Spanish Quarter illage — a living history museum centering on life in colonial St. Augustine. Just down the street is Ripley’s Believe It or Not, located in the Castle Warden, a beautifully restored landmark built in 1887. The museum contains oddities collected from around the world.

Just to the north of the historic district are two other notable landmarks. The Fountain of Youth Archeological Park (established in 1903) is said to be the explorer Ponce de Leon’s legendary spring. Even if the springs do not rejuvenate the visitor, the ground’s gardens will make the visit worthwhile. The Mission of Nombre de Dios (1565) is the site of the beginning of Christianity in this country. The site is marked with a cross visible for miles.

St. Augustine Beach and Its Attractions
Across the bay from St. Augustine are two other landmarks; three if you count the bridge that takes you across the bay. The Bridge of Lions is unique. It gets its name from the two marble sculptures standing guard at the foot of the bridge on the St. Augustine side. Built in 1927, the two-lane drawbridge is endangered — not from poor construction, but for the desire to build a newer bridge to allow for more traffic, both on the roadway and in the water. Currently, there is a plan to restore the bridge and preserve its form. The plan would maintain its structure, widen the car lanes slightly, and add a safety barrier between the car lanes and the sidewalks.

Across the Bridge of Lions in St. Augustine Beach, the St. Augustine Alligator Farm and Zoological Park is more than a zoo. It is the first alligator farm in the country and its major exhibit is the “Land of Crocodiles”, which features all twenty-three species of the reptile. The Alligator Farm has over two thousand alligators and crocodiles, plus other forms of wildlife from around the world – exotic birds, monkeys, snakes, and tortoises. An elevated boardwalk leads through a lagoon where visitors can see alligators and wading birds close-up.

Lighthouses are always interesting attractions to visit and the St. Augustine Lightstation, as it is called, is no exception. The lighthouse was built in the late 1800s and was manned from 1874 to 1955. Now the lighthouse and its outbuildings serve as a museum attracting thousands of visitors annually. The ascension of the 219 steps to the top of the 165-foot tower rewards the climber with a panoramic view of the beaches of Anastasia Island, the city of St. Augustine Beach, Matanzas Bay and its marinas, and the three bridges leading to historic St. Augustine. At the top of the lighthouse a museum staff member is stationed to answer questions about the tower, the museum, and the view.

St. Augustine has no shortage of outdoor activities either. Opportunities for tennis, golf, and water-related sports are prevalent and as varied as St. Augustine’s other attractions. A visit to the “nation’s oldest continuously occupied city” is a step back in history and a step everyone should take.

My Experience of the Florida Keys Dolphin Swim