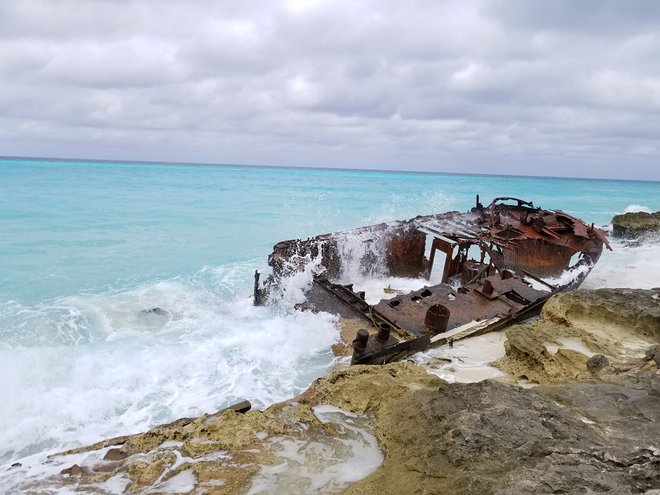 The call came from my friend, “Hey, would you want to go to Bimini for a week and stay on my boat I have docked there?” I didn’t have to think twice. After a quick look at my day timer I said, “Yes!” and was, suddenly, committed to an impromptu vacation. I would soon find out how incredible this set of Bahamian islands are.

A short flight to Bimini was a superb way to begin the adventure to this small and quaint island. From Ft. Lauderdale Executive Airport, via Bimini Island Air, we soared in a small eight-seater plane, blessed with stunning views, from take off to landing. I was filled with excitement flying through the huge puffy clouds towards the two islands that would be my host for a week. As we approached the islands I noticed the long, skinny boomer rang shape of North Bimini, as compared to the smooth round shape of South Bimini. We landed at the airport on South Bimini. It was then that the adventure truly began. From the airport, I needed to get to North Bimini where my friend’s boat was docked at the Big Game Club, a busy marina where many boats from the U.S. rest. At the airport, a few of us got into a local taxi. There are land and water taxis on both islands. The land fare includes the water taxi fee of $5. The short ride transported us to the water taxis, which then transported us to North Bimini, where most of the attractions are located. The water taxis would have taken me to the Big Game Club but I choose to walk from the drop off instead. You can’t get lost on North Bimini. There are only two roads, the King’s, and the Queen’s highway. I walked a short distance to the boat dock and found my friend’s boat, where I was going to make home for the next week.

Snorkeling was the activity of my trip. The waters there are some of the clearest I had ever seen. We were able to see 50 – 100 feet under water, with glimpses of the sandy bottom and colorful reefs. A few miles off shore flows the Gulf Stream where the depth of the ocean drops from 100 feet to thousands of feet. One sunny day we snorkeled in the Gulf Stream, where, instead of snatching views of reef dwellers, we experienced a light show hosted by the one and only Mother Nature, as sunbeams cut through the warm waters in numerous different directions. As you can imagine, the best part of snorkeling was the chance to swim the reefs around the island. The reefs gave us a chance to experience two unique formations, Three Sisters, off North Bimini, and Atlantis Road. The Atlantis Road rock formation is thought to be the uncovered “lost city” from the prehistoric civilization of Atlantis. We had the opportunity to snorkel around the reefs just off the beach as well. This experience is a must for the beginner snorkeler. It offers plenty of sea life, and a boat wreck, all with the security of close proximity to the shore. For scuba lovers, there are some spectacular dive spots, such as Little Cavern and Rainbow Reef.

Boating around the island also offers adventures in local sea life. I had the special chance to be the guest of some intriguing hosts; stingrays off the shore of a small island off South Bimini, and a plethora of wild dolphins off North and South Bimini. Bimini is noted for some of the most playful dolphins in the world. We ran into plenty of spotted and bottlenose dolphins. As we approached the dolphin’s playground, we realized that time spent with wild dolphins is never a dull experience. These dolphins, like most, took advantage of the presence of the boat, by swimming and jumping in the boat’s wake. Once the boat stopped, the dolphins got bored and swam off quickly. Fortunately, there were plenty of dolphins to encounter for the duration of the day.

There is one convenient attribute of Bimini to note. If the wind is rough and blowing, you can be assured that one side of the island will be calm. You can anchor your boat on the calm side, and head off to explore for the day. The day we were there, the wind was blowing hard on the eastern part of the island, but the western part was flat as glass. We were not able to take the boat out, but walking and playing on the beach was fulfilling. This beach is located on the Western side of the north island, with plenty of sand to nestle in, large trees to catch some shade under, and picnic benches, built by the locals, to utilize near the shore. If you walk to the northern part of North Bimini Island, there is an intimate park, with beautiful trees and a picnic area, a nice variation from the rest of the mostly treeless island.

If you have a day to spend on the island and decide not to partake in boating, you should consider some of the island’s other activities. One possibility…you could walk the entire island. On North Bimini it may take a few hours to walk from one tip to the other. You should bring plenty of water, to combat the potential level of heat. You could also stop into a few tourist attractions, such as the Hemingway Museum, Bimini Museum, or Open Air Market.

Pictures and stories of “Papa” Ernest Hemingway adorn the Hemingway Musuem. They tell stories of how he made Bimini one of his favorite getaways. He frequented the Complete Angler, a local bar where the Musuem is located. Visit one of his homes and see where he wrote a good portion of his books, To Have and Have Not, and Islands in the Stream. At the museum we learned that one of the main reasons Hemingway loved this island is because Bimini has long been know as the big-game-fishing capital of the Bahamas. Deep-sea anglers find bliss here, for in its waters roam great warriors such as marlin, swordfish, giant tuna, wahoo, sailfish, and bonefish.

If you plan to visit the Bimini Museum we highly suggest that you find out when the museum will be open. This is the Bahamas! The doors may not open during “normal” business hours. As the Bahamians would say, “Relax mon”. Indeed, guests of Bimini must remember to relax and go with the flow. A superb place to do this is at the Open Air Market, which has some unique shopping opportunities from local Bahamian cloths, liquors, and other souvenirs.

After re-boarding the boat, we continued to spend the week snorkeling and relaxing. We spent almost every night on the boat, except Wednesday night, the night North Bimini, particularly Bailey Town, comes alive. The locals and the tourists get together for some zesty fun. We started the night eating dinner at the most popular restaurant, the Red Lion Tavern. The food and service were decent. They have some of the best cracked conch around, in my opinion. I made my meal from cracked conch and conch chowder. After a pleasant dinner we headed to the Complete Angler for some Ring Toss, a locals’ bar game, and dancing to the tunes of local musicians. The music is always up beat and can make anyone want to jump up and down. We danced past midnight.

Staying with my friend and his impressive sailboat made staying in Bimini easy for me. For those without friends on Bimini, there are plenty of nice hotels, including Bimini Big Game Club, Bimini Blue Water, and Sea Crest Hotel. On South Bimini the Bimini Beach Club is the place to stay. I was able to use all facilities at the Big Game Club, which included a large pool, pleasant restaurant and bar, and plenty of friendly people.

If you have a friend with a boat, don’t hesitate to take him/her up on any offers to visit Bimini. It’s an enjoyable way to travel around Bimini. Bimini’s close proximity to the United States, and lack of crowds make it a fantastic place for a relaxing getaway. At the same time, the islands’ outstanding boating, diving and snorkeling, its unique history, and some of the best fishing in the world, makes it an amazing adventure destination.

Visiting Palace of Versailles and Paris

Mexico Vacations, Yucatan…You Can Too!

My Beginners Experience Skiing in Colorado