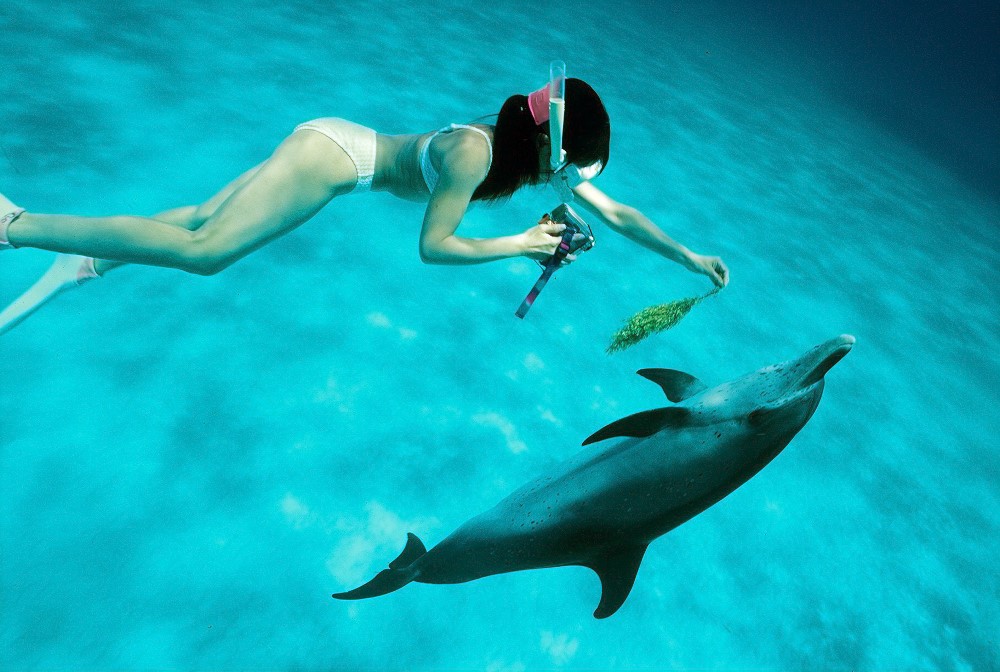 Sabine Hoffmeister, originally from Germany, now lives in Dublin, Ireland. She is a sporty woman, 35 years old, who loves swimming and outdoor activities, which is a rarity in Ireland. Sabine visited Florida for the first time 4 years. Now, she says that she loves the state. Sabine got her scuba certification in Florida through Ocean Promotion Dive Center in Ft. Lauderdale. She participated in Dolphin World’s Swim with the Dolphins in Key Largo Florida. Afterwards, Sabine felt the urge to try something different. She decided on the wild dolphin encounter in Bimini, Bahamas. Sabine didn’t hesitate to give this weeklong vacation a try.

Sabine’s voyage to the island of Bimini, from Ireland, provided the typical case of jet lag. Her trip was made slightly easier by flying directly into Ft. Lauderdale instead of Miami. This saved quite a bit of transportation hassle and time; time that Sabine used to rest before heading down to the Bahamas.

From Ft. Lauderdale, Sabine made her way to the Executive Airport, a small airport outside of Ft. Lauderdale, to fly to Bimini, Bahamas. Sabine traveled on BIA, a small independent charter carrier. The planes are small but Sabine experienced a take off and landing that was smoother than any big plane she’d been on. The 15-minute flight offered amazing views of the Bahamas and the brilliant turquoise waters below. While on the plan, Sabine met a new friend, Susana, from Argentina, also doing the trip. They took a cab together to the Bimini Sands Hotel in South Bimini, where they awaited Captain Geoff’s arrival and go-ahead to board the boat.

Captain Geoff formally greeted everyone and gave a friendly explanation about the boat. Then, Captain Geoff had everyone introduce him or herself. On Sabine’s trip there were 6 guests for the week, Sabine’s new friend Susana, 2 from Switzerland, 1 from New Jersey, and 1 from Minnesota. All were first timers on the trip, so they had quite a bit to chat about. Fortunately, everyone spoke English so they could all communicate well with one another.

After the meet and greet, Captain Geoff gave a weather report on the week ahead and then all gathered for their first meal with Christina. Christina was the jack-of-all-trades. She cooked, clean, and assisted the first mate, throughout the entire trip!

Sabine describes her experience:
“The first night Christina cooked a great meal with plenty of food. After the meal we were all ready to have a good nights sleep. At night you have an opportunity to either play games, read, or sit on the deck to view the stars.

As with any trip, there are no guarantees of the weather. The crew prayed for good weather. The first day brought calm seas in the morning. Captain Geoff warned the crew that a strong weather front was coming in the afternoon. We got a chance to practice snorkeling in the morning but after lunch the winds were kicking up and we could not go out that day. Captain Goeff has two boats, the large Trimirane, and a small dingy boat that he uses to get around the island because it’s fast and easy to get in and out of the water.

The first day out with the dingy we found a group of bottle nosed dolphins, right away. They were so pretty! They stayed with the dingy and jumped around the boat. We were with the dolphins for about 20 minutes, until Captain Geoff suggested continuing looking for the spotted dolphins because they are easier to swim with. The spotted dolphins are more curious and aren’t as shy as the bottle nosed dolphins. About 1/2 hour later we located a group of spotted dolphins, about 6 or 7 of them. They were really busy swimming and feeding in the water. The dingy did its best to keep up the dolphins. Captain Geoff tried to get them to play in the wake of the boat, but only a few took interest. It was not the perfect time to get in the water because they were feeding, so we stayed with them for about 1/2 hour longer.

One day we had perfect weather in the dingy and the Trimarine. It was beautiful with flat seas and perfectly crystal clear water. In the morning we waited to see if the dolphins would come around the big boat while we snorkeled. It was so reassuring that Captain Geoff was in the water the whole time watching over us, to make sure that we were safe. We saw all kinds of sea life, tropical fish, Nurse Shark, (not dangerous), stingrays, yellow fish, blue fish, stripped fish, and lots of Star Fish on the sanding bottoms. We experienced snorkeling in a spot on Bimini called the 3 Sisters. This spot had all kinds of formations, and 3 big stones jutting out of the water. We put the dingy near these formations. Under the water were incredible reefs many ledges at different depths. This experience was a bonus to the trip.

We had a great time snorkeling, but no dolphins encounters happened that morning. After another fulfilling lunch we traveled with the dingy to look for dolphins. We spent a good 3 or 4 hours on the dingy looking for dolphins. On this day we didn’t have any dolphin encounters, but enjoyed looking for them. We came back with great expectations for the next day.

These beautiful spotted dolphins looked us right in the eyes. It was incredible! We all really appreciated that we were allowed into their world. It was a humbling experience! We realized how slow and cumbersome we humans can be, and how graceful the dolphins are in the water,  swimming with ease. We became more comfortable in the water because of the dolphins’ gentle appearance and their smiling faces. After a short while the dolphins took off and we got back on the boat. We continued to follow them again for least another 40 minutes. The spotted dolphins grouped up with bottlenose dolphins to chase a big school of sardines. All the dolphins were able to work together hunting for their meals. Again, it was incredible! The crew was happy. We had finally achieved what we came to achieve. We all agreed it was worth the wait.”

Today, Sabine recollects the positive effect the dolphin encounter had on her. The trip was a great success and Sabine says she can’t wait to do it again. Next time, she hopes to have an opportunity to spend more time with the dolphins. Overall, Sabine brags of a beautiful vacation, with great food, and nice people who have the same interest. She says, “I will miss my new friends on the boat and in the water.”

A Day at Coral World in St Thomas US Virgin Islands

How to Get to Tortola, BVI? By Plane or Sea?

Tortola is an amazing and beautiful Caribbean Island, with large volcanic mountains,…

The Caribbean is often known for its warmth and slow paced bliss,…